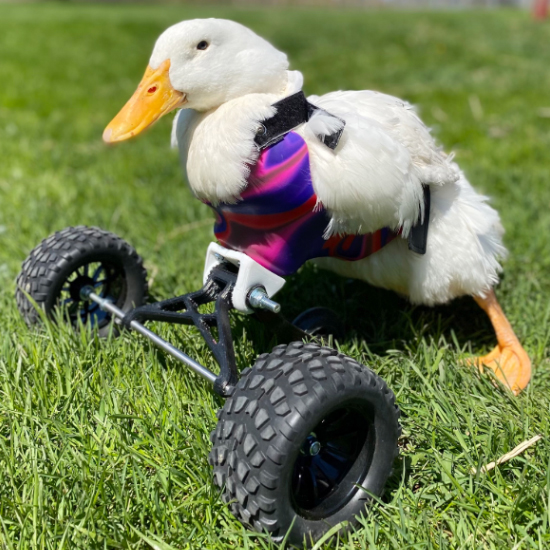 Inspirational Kiwi had a rough start in start in life after she was used as part of a school hatching experiment, and then later a.t.t.a.c.k.e.d by a predator, leaving her sibling d.e.a.d and her para-lysed. Courageous Kiwi was born in a school during a class egg hatching experiment, where the students were taught about the cycle of life by using live duck eggs. But after the experiment ended and Kiwi got bigger, the school no longer needed her – so she was taken in by a kind local couple. Sadly, shortly after this Kiwi and her sibling were at.t.a.c.ked by a predator – believed to be a fox – which left one d.e.a.d and her p.a.ralysed.  But after being rescued by the non-for-profit Woodstock Farm Sanctuary in High Falls, New York, USA, the white pekin duck is thriving. The 10-month-old duck  has been undergoing physical therapy to help regain her strength and was had been learning to walk again with an old homemade wheelchair. 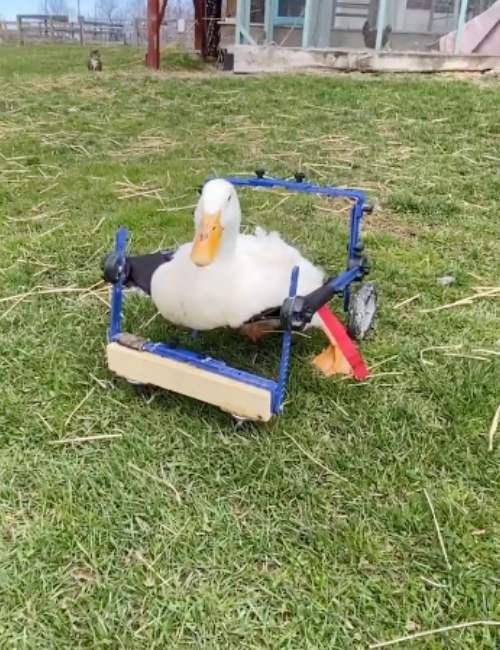 But thanks to pet prosthetic company Bionic Pets, with the help of custom animal cart creator Waggin Wagons, Kiwi now has two sets of hot pink wheelchairs – one with four wheels and the other with two – to give her mobility in all terrains.

Spokesperson for Woodstock Farm Sanctuary Lizz Truitt said: “Kiwi is a very special duck, and she means a lot to us. When she first came to the sanctuary, we were not really sure if she ever would walk again or have any quality of life at all. Ducks love water, so we decided to put her into a bath to see if she had any use of her legs. Amazingly, her instincts kicked in and she began moving her legs to swim. So we knew it might be some nerve damage and that she could possibly get better. We created a wheelchair for her, but it was more of a prop so she could eat, drink and move around, but it just wasn’t the best. She undergoes a lot of physical therapy, and gets pampered with a lot of love and support. Two weeks ago, we took her to a company called Bionic Pets that make prosthetics for animals. They created two custom wheelchairs for her that would suit both indoor and outdoor terrain. They look fantastic as they were bright pink and perfect for her. She is slowly building strength, and will get faster in the future. She is very happy with her new wheels.” 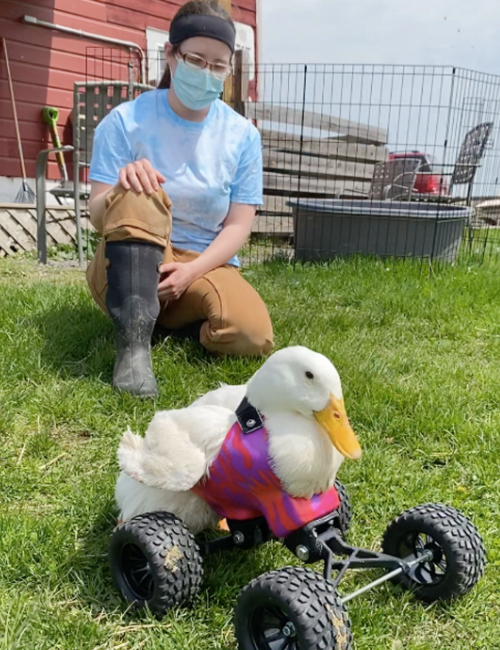 Lizz said: “She was part of a hatching program at a school, where kids were given live duck eggs to raise to teach about the cycle of life. But after the project was over, the school didn’t know what to do with the ducks anymore. A kind couple took them both in so they wouldn’t be abandoned, but then the attack happened. A predator then killed one of them, and Kiwi was attacked but luckily survived. But she was left paralysed. We really don’t know what attacked them, but we think it was likely a fox as they’re pretty common in this area. Through one of our rescue partners, Kiwi came to our sanctuary in October 2020.”

Thankfully Kiwi is now living her best life and is happier than ever being looked after by kind workers at the sanctuary. And while Lizz added they are not sure whether Kiwi will ever fully learn to walk again on her own, they are taking it one day at a time and are hoping for the best. 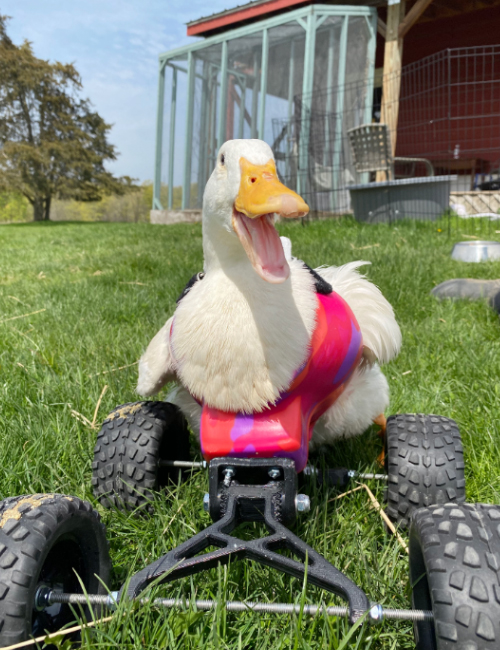 Kiwi’s happiness and confidence has soared since. She has a very big personality, and she needed that to survive everything she went through before we met her. Kiwi is a very determined little duck that wants nothing more than to be the star of the show. We are all so proud of her.

Although it’s often done with good intentions, including animals in school projects can have terrible outcomes. These animals are usually not given the specialized care they need in terms of food, environment, and medical care. Even worse, sometimes the animals end up abandoned and unable to fend for themselves when the school year is over.